Hello all! I'm in a new location for a while, back in London so the nature of my posts might be a little different to normal. I won't be here for long, just have some work stuff to organise, not to mention all the boring immigration stuff I still have to deal with.

In fact it's the boring immigration stuff I want to talk about right now. I have had a fair amount of trouble just locating the correct information I needed in order to move to Barbados. I realise that it's quite an obscure place to move to (by that I mean fewer people up and decide to move there; it's not exactly Australia or the US). But I figured it might be a good idea to share my findings with the people of the internet!

I can't speak for other countries because I've never tried to move anywhere else but I have to say that finding any information from the UK is close to impossible unless you know EXACTLY what you're looking for. Perhaps it was naive of me to think that I could just type 'Barbados immigration' into Google and instantly find the one form that would apply to my specific situation. BUT once I realised that there was more than one form (duh) Somewhat more sensibly I went in search of information that would tell me which form I needed but failed again to anticipate the difficulties I would face in doing so.

I found no magical website where everything was clearly labelled in a way that makes sense to the average person. I found no forms online and NO helpful people at the Barbados High Commission.
I thought I'd had some success when i was directed to an online document which looked very official and certainly seemed to have all the information I'd ever need. This however turned out to be the most long-winded, confusing and ultimately unhelpful document ever written.

Deciding that I either lacked the know-how to locate the information or that I had found it and was too stupid to make any sense of it I gave up and convinced myself that things would be easier in Barbados.

Luckily I was right!!

I called the Chief Immigration Officer on (001) 246 426 1011 and spoke to an actual person!!! I told this person that i was trying to move to Barbados. I explained that i didn't know what I needed to do but had figured there must be a form somewhere out there that would allow me to stay in Barbados. I even went on to explain that I didn't need to become a citizen. Anything would do as long as I would be granted permission to live and work in Barbados indefinitely.

This is basically how the conversation went,

Me: Hi I'd like to move to Barbados please! How can I do that?

Him: Were you born here?

Him: Have you lived here before?

(so far I felt it wasn't going well)

Me: Both my parents are citizens

Him: But you are not?

Him: Until two years ago our policy made exceptions for people whose parents were citizens but that policy has changed. Since you are over the age of 16 this would not apply to you anyway. We also used to fast track (that's my phrasing not his) people who had been living in Barbados for more than 5 years but that has also changed. Now that policy only applies to those who have been on the island prior to 1998. (I'm pretty sure it was '98, I must admit to tuning out slightly at that point as this information didn't apply to me)

Him: You need to apply to obtain immigration status. Come to the immigration office at Careenage House, The Wharf, Bridgetown, Barbados and collect the 'Application for Immigration Status and Non-National Registration.

Me: Ok, will I need to bring any ID or other documentation with me?

Him: No, just collect the form, fill it in in triplicate and send it back.

Me: Ok so once I've done that how long will it take for the application to be processed?

Him: It takes three years to gain immigration status but there's no guarantee.

Him: This application is just the VERY first rung of the ladder. Your application may be denied at this early stage.

Me: What would my options be if that were to happen?

Me: So..........let me see if I'm understanding this correctly........what you're saying is that I'm welcome to try but it's entirely possible that I won't be successful and if this is the case then there would be no other way for me to live in Barbados. Ever.

Me: Guess I better get married then!

Him: If you get married you would go through a similar 3 year process but during this time you would be permitted to live and work in Barbados.

Me: *finger pyramid of evil contemplation* Thank you, you've been very helpful!

I failed to ask what reasons people may be denied entry into the country but I assume it's things like poor health or a criminal record. I say this because the form I collected puts a fair amount of emphasis on proving that your presence won't be a drain on the state. Fair enough! I'm lovely and any country should be happy to have me :) 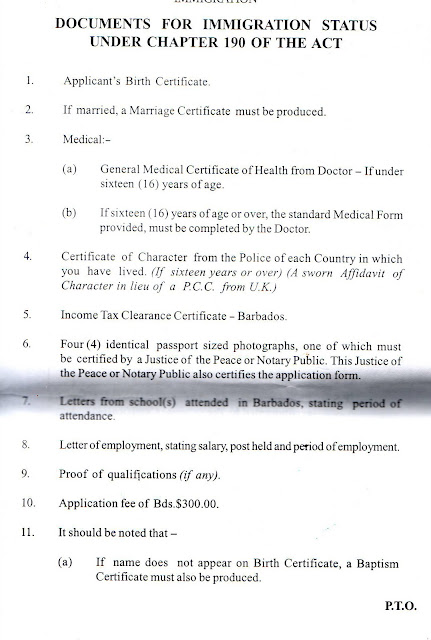 I should really apologise for the quality of the scan, It has been stuffed in a suitcase for the past 2 days. Unfortunately I can't make it any bigger either but if you're having trouble reading point 7 here's what is says,

'Letters from school(s) attended in Barbados, stating period of attendance.'

The text that's cut off at the top says 'IMMIGRATION' and if you're wondering what exciting things lie on the reverse side of the sheet I'll show you! 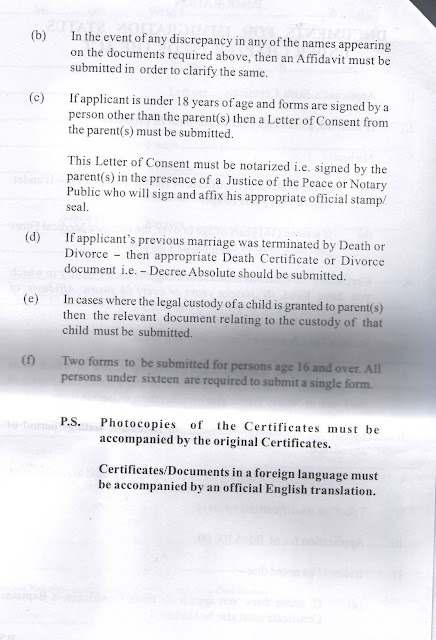 'Two forms to be submitted for persons age 16 and over. All persons under sixteen are required to submit a single form.'

Also the medical form mentioned in section 3, b) comes affixed to the form and looks like this, 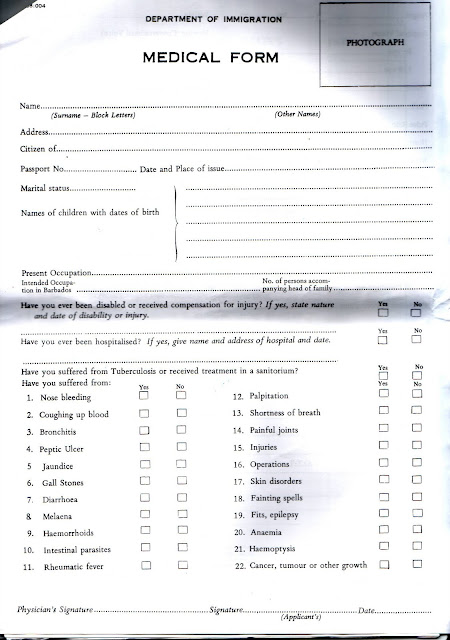 This one wins the prize for most illegible scan of the day! That blurry question refers to disability and compensation for injury. In any case, you get the idea. All these papers (including the actual immigration form itself) come stapled for your convenience and unlike the most long-winded, confusing and ultimately unhelpful document ever written they are easy to understand!

Obviously I have not yet come to the end of my immigration plight but I do feel a little closer. I'll make sure to update you as I go, please feel free to share similar experiences or tips with me in the comments box!

Oh! and as a side note!! If you're going to the immigration office in Barbados make sure you are dressed 'respectfully.' If you think you're over dressed, trust me you're not. I assumed this warning applied only to beach bums or people in assless chaps but apparently having your shoulders on show offends the sensibility of the average immigration officer.................. 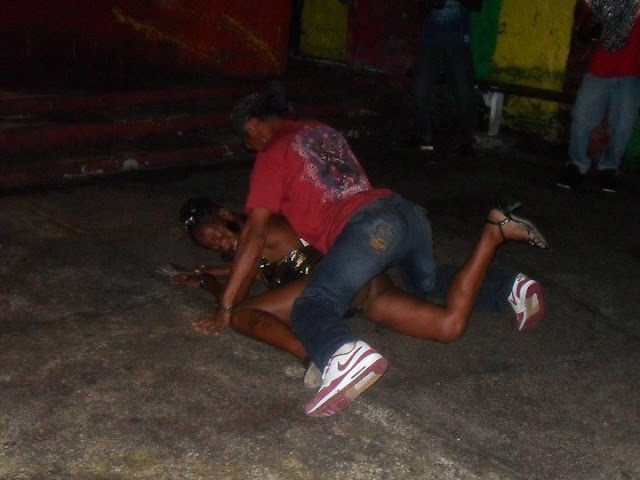